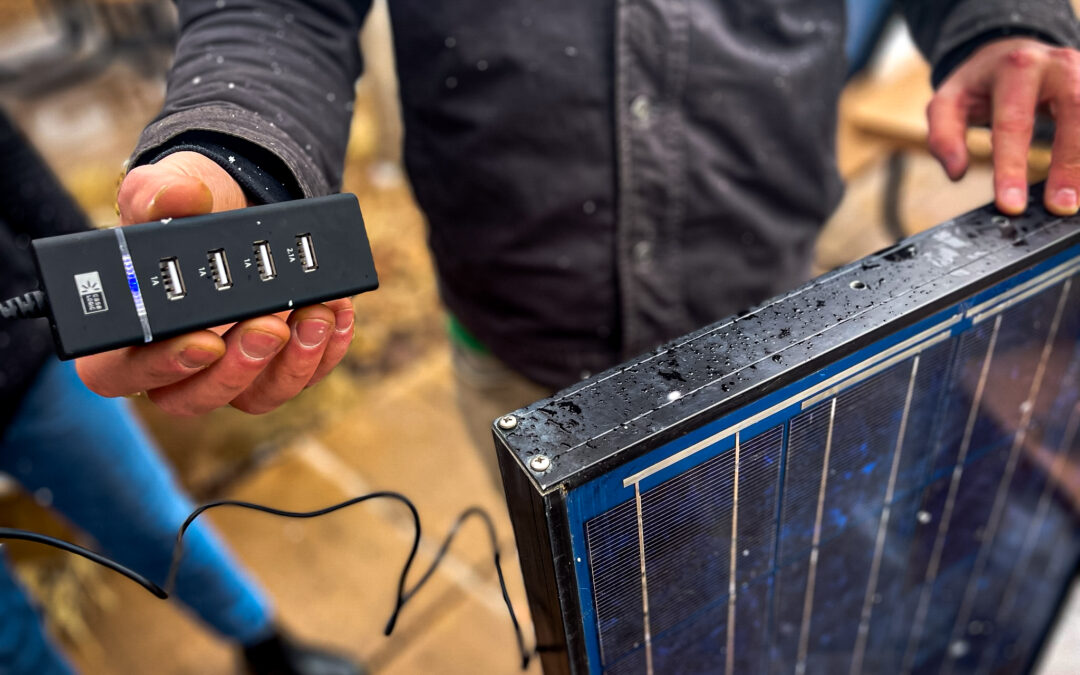 For the millions of refugees, as well as for the millions of civilians still left in Ukraine,  something as basic as charging your cell phone can be a challenge with potentially fatal consequences. A group of students and climate activists at Western Colorado University in Gunnison wants to help.

Above photo: Richard Stromberg, a professor at Western Colorado University and co-founder of Equitable Solar Solutions, holds up a USB port that can charge a phone by the power of the sun. Christopher Biddle/KBUT

Photovoltaic solar panels are expensive. They’re also hard to recycle, and their production degrades over time – often resulting in a life span of about 20 to 25 years, depending on the purpose. What’s more, the amount of solar panel waste in the US is increasing. By the end of the decade, the panels used in the first generation of industrial-size solar farms will no longer be up for the task.

But amongst all those problems, Richard Stromberg and his colleagues found a solution.

“So literally, we just direct wire the USB port … directly into the back of the junction box on the photovoltaic module. And then we attach it here. And whoever uses it, all you have to do is point the module at the sun.”

Today, he’s invited the college community to help assemble solar-powered USB chargers that will eventually go to Ukraine and Poland. We’re on the patio outside the student center. The panels are dented, and scratched, with paint peeling and other signs of sun damage.

“Electrically these are fine,” says Stromberg. “But we found some issues that we wouldn’t want to put on those households, because we’re not confident they’d last another 20 years. But there’s but yeah, they’re still usable, usable for quite a while. So send them to a war zone. Send them to a refugee area. Let them travel overseas. It’s not the end of the world if something gets damaged, but we’ll get as much life out of them as possible. And they could last another 20 years! But even if they last just another year over in Ukraine, that’s better than nothing. That’s better than sending them to the landfill.”

Researchers estimate that by the year 2050, discarded solar panels could amount to 78 million tons of what most people would call waste. Stromberg and his colleagues have found a way to turn that stream of waste into not only a product line but a resource for equity and relief.

Campbell Mixon is a Western student and an intern at Equitable Solar Solutions.

“These solar panels really just provide access to those who can’t afford energy or be connected to the grid. Energy is something that like, it’s a basic necessity at this point. It’s something kind of like water and food. People shouldn’t have to go without it.”

Back inside the student center, I talk to Maria Struble, who’s brought her freshman general ed class to help with the project.

“What better way to teach social activism and political science than engaging in doing something that will benefit people that are displaced and oppressed. And so we just wanted to get our heads dirty and, like talk about those issues by doing something about them.”

Once the chargers are all put together, Struble distributes colored markers. The students scrawl messages of courage and doodle peace signs and rainbows. There’s even an impressive rendering of the school’s mascot, the mountaineer. The panels still don’t look new, but the decorations are an obvious metaphor for their renewed purpose.