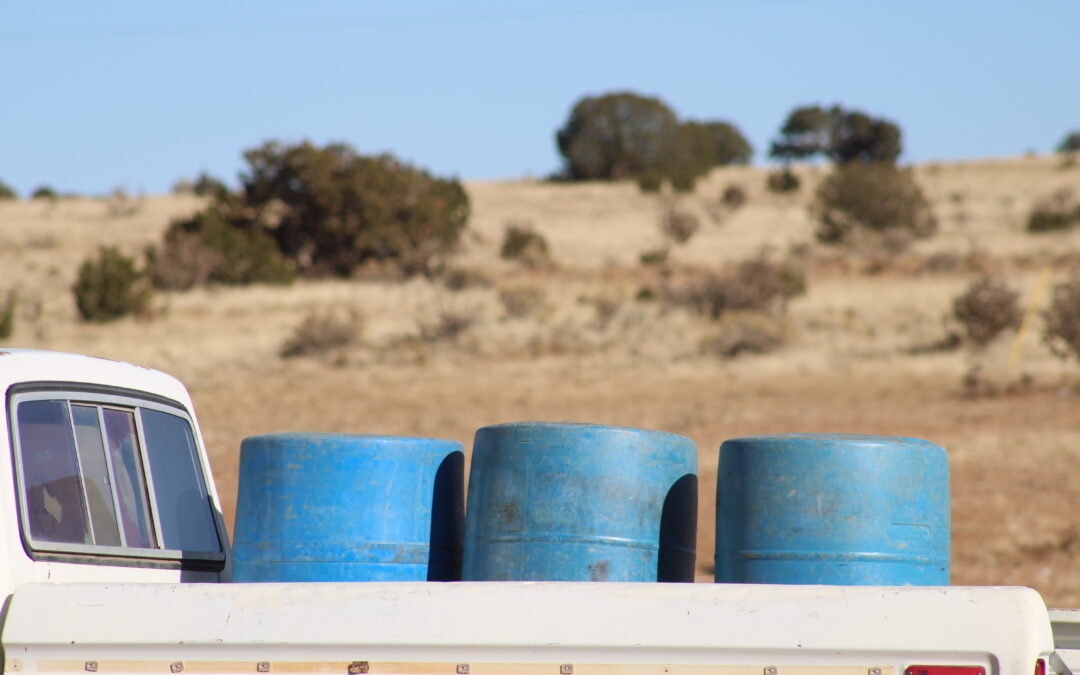 Above photo: Many tribal homes do not have reliable access to clean water, and instead have to truck it in from far away. A new bill aims to provide more funding for the operation and maintenance of water systems for tribal communities.

Two recent moves aim to benefit water access for tribal communities in the Colorado River basin. One, a bill in the U.S. Congress, could increase access to clean water. Another, the release of a “shared vision” statement, outlines the goals of tribes and conservation nonprofits.

Tribes in the basin hold rights to about a quarter of the river’s flow, but have often been excluded from negotiations about how the river’s water is used. At the same time, tribal communities often lack reliable access to clean water as a result of aging infrastructure and a history of underinvestment.

The bill, called the Tribal Access to Clean Water Act, was heard by the House Natural Resources Subcommittee on Water, Oceans, and Wildlife. It calls for the allocation of $2.3 billion across different federal agencies, all aimed at developing and maintaining water infrastructure. Some of that work would be carried out by federal agencies themselves, such as the Indian Health Service and Bureau of Reclamation, while more than half of the funds would be made available for grant programs.

It was introduced by a bipartisan group of four representatives, including one from within the Colorado River basin – Colorado’s Joe Neguse.

The measure is largely designed to fill in funding gaps left by the bipartisan infrastructure law – money to operate and maintain existing water systems, and design and engineer new ones.

“The bipartisan infrastructure law provided extraordinary new funding for the infrastructure associated with tribal water systems,” said Anne Castle, a senior fellow at the University of Colorado Law School. “But this bill provides the necessary human part of the equation.”

Jonathan Nez, president of the Navajo Nation said that native american households are 19 times more likely than white households to lack access to clean drinking water through indoor plumbing, calling that fact “one of the great inequities of our time.”

Also last week, a group of six tribes in the upper Colorado River basin released a “shared vision” in conjunction with 10 conservation groups. The statement puts forth a set of collective priorities held by tribes and environmentalists. Both groups say their interests are not adequately protected by the river’s governing documents.

“In the Colorado River Compact of 1922, there’s no allocation of water to tribes, simply a recognition of the fact that the Compact doesn’t deal with tribal water rights,” said Jennifer Pitt, Colorado River programs director at the Audubon Society, “and there is basically no mention of the environment or management of environmental values.”

The groups share their vision as water users prepare to negotiate a new set of rules for the river, since the current operating guidelines expire in 2026. States have historically been the power players in similar negotiations, although calls for greater tribal inclusion have been growing since tribes were not consulted on 2007’s interim guidelines.

Pitt said the priorities held by tribes and conservation groups – a 12-item list that includes protecting the river’s “ecological integrity” and giving tribes greater influence in its management – are important at this particular juncture.

“The basin itself needs us,” she said. “The Colorado River system is crashing. It’s clear that our infrastructure and policy framework is not equipped to deal with the change that climate change is imposing on the basin. So it’s an important time for new players to speak up and be part of management solutions.”

The new vision statement follows a number of recent decisions where tribes collaborated with governments or conservation groups to safeguard against drought and protect habitats. This includes tribal input on drought management plans in the upper basin, and the leasing of water from the Jircarilla Apache Nation to benefit endangered fish.

“Each of these recent developments illustrate how Tribes, conservation organizations, and state and federal governments can work together to find and implement solutions that will help address the challenges of a drier future in the Colorado River basin,” said Daryl Vigil, water administrator for the Jicarilla Apache Nation.