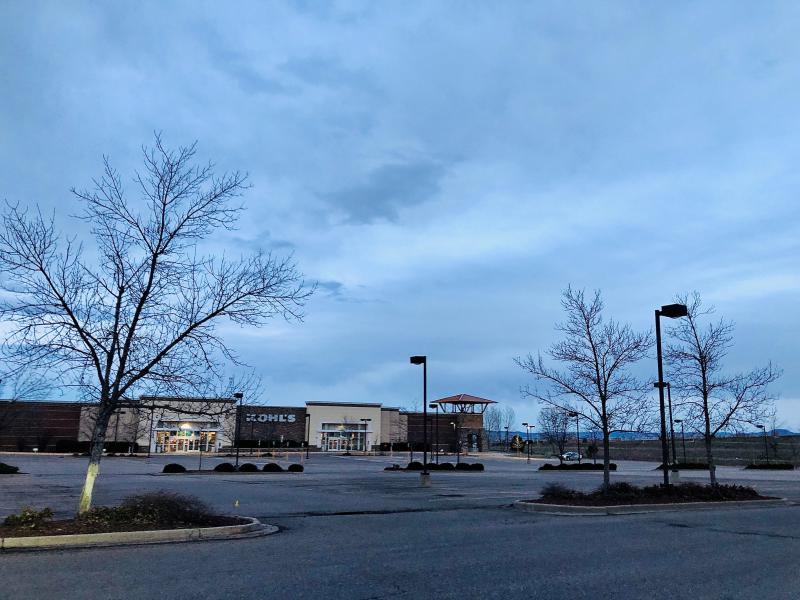 Photo: A shopping center parking lot in Littleton was mostly empty on Sunday, March 29 except for a State Patrol vehicle. The state remains on a stay-at-home order through April 11. Credit: Scott Franz/Capitol Coverage.

Polis said new testing results suggest the spread of the COVID-19 may be slowing days after schools, bars and restaurants were ordered to close their doors around the state. He reported it is now taking five days for cases of the virus to double statewide.

That’s up from the two-day doubling rate at the start of the viral outbreak.

“We have successfully, slightly delayed the peak and slowed the spread with the steps we have been taking with bars and restaurants,” Polis said.

But he warned that despite the data suggesting the doubling rate of the virus might be slowing, it is still “an extremely contagious virus.” And he said the latest data comes with the caveat that there are still likely thousands of residents with the virus who have yet to be included in the test results.

Polis also announced the virus has now killed 51 people in Colorado, including two people in their 40s.

Seeking to assure reporters he was not sick himself, Polis said his voice was scratchy and hoarse after speaking at a marathon of conference calls and press conferences in recent days.

He was also required to have his temeprature taken before entering the state’s emergency operations center to speak with reporters.

He urged Coloradans to be patient and continue social distancing while a statewide shelter-in-place order remains in effect until at least April 11.

“It’s important to pace ourselves in this,” he said, adding the effects of the coronavirus would last months. “There is light at the end of this tunnel.”

Polis said vehicle traffic statewide has decreased by 60%t in the last four weeks after residents were ordered to avoid non-essential travel. But he said the state needed to reduce traffic even more to help prevent the spread of the virus.

He also said other challenges remain, such as obtaining thousands more ventilators and surgical masks that are still needed at hospitals.