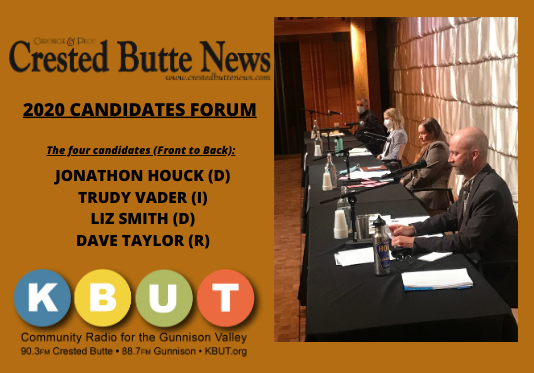 Jonathan Houck (D), the District 2 Representative, and the chair of the Gunnison Board of County Commissioners, is seeking another term. He’s served as a commissioner since 2012.

Liz Smith (D) is also an incumbent, but just barely. She was appointed to the board in July following the resignation of John Messner. Smith is a professor of English and humanities at Western Colorado University.

Smith faces Dave Taylor (R), a former CPA, and the owner of the KOA campground near Gunnison. He’s also a local school bus driver. He is known colloquially as KOA Dave.

The Forum was moderated by Dennis Hall of the Crested Butte News and recorded before a very small live audience at the Crested Butte Center for the Arts on Sunday Oct. 11. It was the third forum to put these candidates together. The fourth and final debate will be held virtually, hosted by Western Colorado University on Oct. 15.