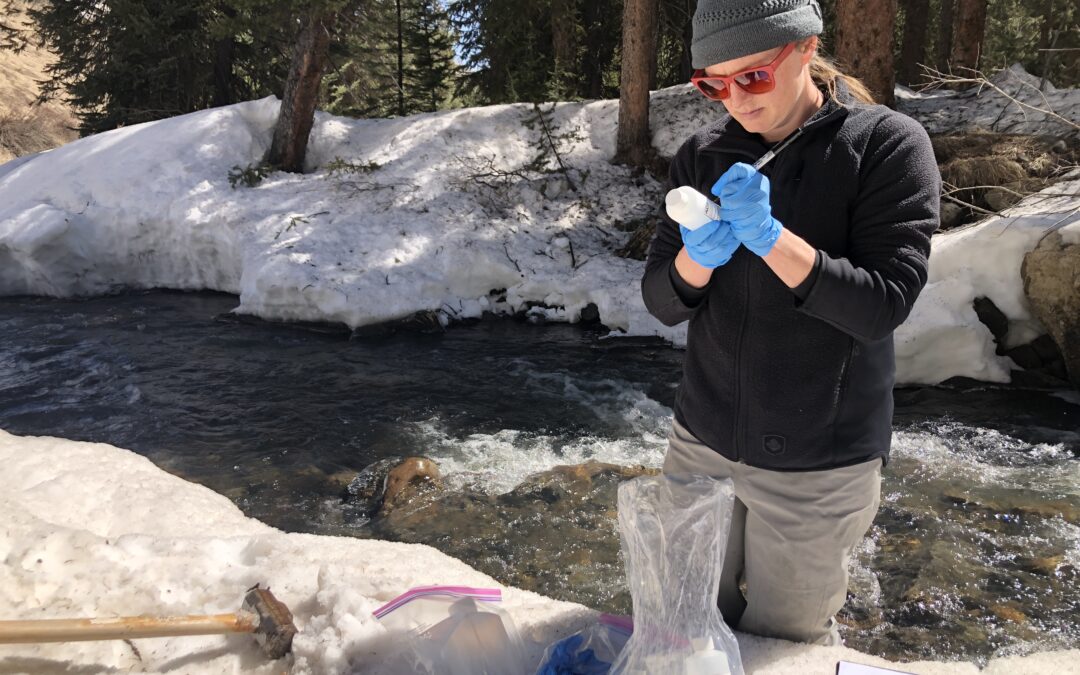 Following a legacy of mining, local organizations keep tabs on water quality. Maintaining healthy waters in Crested Butte is critical as a headwaters source of the Colorado River.

The streams, creeks and rivers that run from jagged mountains into Crested Butte’s watersheds are iconic. At a glance, the water in creeks and streams around the area are clear and pristine. But the legacy of mining tells a different story.

About two decades ago, High Country Conservation Advocates, an environmental nonprofit in Crested Butte, noticed that although the streams and creeks flowing into town looked relatively healthy, they were carrying an excess of heavy metals downstream. Since then, the local nonprofit has made protecting water central to their work.

Julie Nania has spent nearly a decade with the organization advocating for clean water as the water program director. She explained the water in the valley used to look different.

Coal Creek, which provides drinking water for the town, was stained from mining runoff containing iron. Other metals like silver, lead, zinc and copper also ended up in waterways. The tainted water could be traced back to the flanks of Mt. Emmons, just west of town.

“And with the passage of the Clean Water Act, we did get a mine water treatment plant up there,” said Nania. “But we still had some of these historic water quality issues in the valley.”

The Clean Water Act  passed in 1972, and one of its goals was to keep pollutants, like mine waste, out of rivers. In mountain basins with mineral-rich rocks, it’s normal for some metals to wash downstream during spring snowmelt or summer rainstorms — but the water in Coal Creek was clearly toxic.

The Keystone and Standard mines were the two biggest culprits in polluting Coal Creek. Today, Mt. Emmons Mining Company owns the Keystone Mine and operates the water treatment facility up Kebler Pass. Because the mine operated for nearly 100 years, the company is responsible for testing and treating water.

Calling attention to the Standard Mine’s impact on water led to its designation as a Superfund Site in 2005. Declaring the site an environmental disaster helped get the necessary resources to clean up the site. It helped start a water monitoring program and a new nonprofit: The Coal Creek Watershed Coalition.

On a chilly April morning, staff and volunteers spread out along Kebler Pass for a water sampling day. Ashley Bembenek is the executive director and she’s also a water and soil scientist who isn’t afraid to slip on waders and stand in cold rivers in the name of clean water.

“So this is where the town’s water system begins,” said Bembenek. “And it’s just upstream of the Keystone Mine discharge. And that’s incredibly critical to the safety of our drinking water and to manage the treatment costs.”

The nonprofit holds water sampling days five times a year. Each group spreads out to different sections of Coal Creek with a flow meter, water quality probes and water quality testing kits. While walking up Kebler Pass, Bembenek points out the water treatment plant above and Coal Creek below.

We carefully walk down a short and steep hill to Coal Creek where Bembenek sets up her instruments on a level platform she carefully digs out in the snow. She’s here to test for three things. First, she wades into the creek to measure streamflow. Then she pops sensors into the water to measure things like temperature and ph levels.

“So today’s water is a frigid 0.9 degrees celsius, flowing just above freezing, the ph today is 7.03 which is, nearly neutral, no concern whatsoever,” said Bembenek.

A river’s health depends on who or what uses it. Human life, irrigation and aquatic life are all examples of users. Bembenek says the water sampled in Coal Creek is tested for the most sensitive of users – fish and insects.

Bembenek said while the water in Coal Creek is plenty safe for humans to drink following treatment, a few metals remain too high for fish and insects during spring and summer runoff.

The organization will monitor Coal Creek four more times in 2022 to keep tabs on water quality in and around Crested Butte. And, the coalition is embarking on a new initiative, the gossan restoration project, where they will plant trees and restore native vegetation. The project, ten years in the making, will further decrease metals flowing into Coal Creek.

Healthy water flowing from the mountains is essential for the roughly 40 million people who depend on water in the Colorado River Basin. Julia Nania says it’s an important responsibility.

“So in terms of being a headwaters community, usually that means we get to start off with some of the best quality waters, there are some exceptions to that,” said Nania. “Sometimes historic mining tends to be one of the issues we face in this basin  But we also are, you know, kind of the first stewards of those water resources.”

Nania says High Country Conservation Associates will continue to use science to inform their work to make sure the Gunnison Valley gets the highest quality water the basin deserves.

KBUT’s Headwaters series was made possible by The Water Desk, an initiative of the Center for Environmental Journalism at the University of Colorado Boulder.

Listen to the whole series!