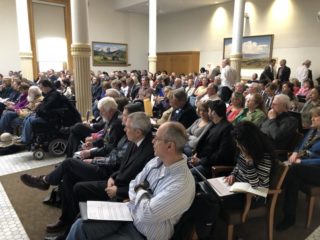 Supporters and opponents of the national popular vote movement wait to testify at the state Capitol during the bill’s first hearing. Scott Franz / Capitol Coverage.

A state-by-state effort to start using the popular vote as the deciding factor in presidential elections is getting some mixed results in the months after Colorado joined the cause.

The leaders of the national popular vote compact are celebrating Oregon’s decision this month to join the group. If the governor approves the change as expected, the Beaver state will become the 15th state to join the initiative.

But the movement is seeing resistance in some other key states.

Last week, Nevada Gov. Steve Sisolak, a Democrat, vetoed his own party’s bill to join the cause.

Sisolak sided with opponents of the change who fear awarding electoral votes based on the popular vote could diminish the state’s battleground status in future elections.

To the east in Maine, a bill to join the popular vote compact faced pushback in the House of Representatives late last month.

And in Colorado, a citizen group that wants to reverse the Legislature’s decision to embrace the popular vote model is reporting some momentum.

Mesa County Commissioner Rose Pugliese, of Grand Junction, is one of the leaders of the effort to send the popular vote question to the ballot.

She said Monday her group has gathered more than 100,000 signatures on the petition.

“We have not been able to print petitions fast enough for the amount of demand that we have from our grassroots volunteers to circulate, so that is a great problem to have,” she said. “The momentum for this issue has not slowed down at all.  We have over 2,100 volunteers that we know of circulating petitions that signed up through our website.”

Pugliese added she is confident the group will get the roughly 125,000 signatures it needs by Aug. 1 to put the question on the November 2020 ballot.

Supporters of the popular vote movement say it would force presidential candidates to mount nationwide campaigns instead of just spending their time in a handful of battleground states.

But dozens of people who showed up to testify against the bill in Colorado voiced concerns about the change, including that it would hurt rural voters and give more power to states with higher populations.

Fourteen states and the District of Columbia are currently in the popular vote compact. Together, they could deliver 189 of the 270 electoral votes needed to trigger the change.