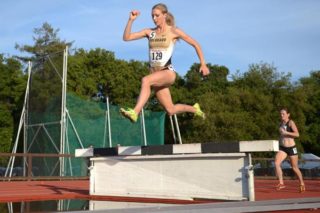 The 2019 USA Track and Field Outdoor Championships kicks off today at Drake University in Des Moines, Iowa. Among the many competitors is Emma Coburn, who will be gunning for her sixth U.S.A. title in a row (her eighth overall) in the 3000-meter steeplechase. Coburn’s prepared for the event by training at high altitude in her home-town.

“I’ve been training in Crested Butte for the last couple of weeks in prep for the U.S. Championships so I’m feeling good and I’m feeling excited,” she told KBUT.

Coburn has been the dominant American woman in her event over the past decade. But that doesn’t mean that she’s not open to trying new things to help her win races, like at the Prefontaine Classic earlier this summer.

“I came into the race really trying a little bit of a new tactic,” said Coburn. “ The current world record holder was in the race, and she usually starts the race super fast and breaks everyone in the field and then kind of runs away. Usually, I’m a bit more conservative in the beginning . . . but this time I wanted to start with the world record holder and just hold for a few laps and try to maintain.”

Coburn took the silver in that race, posting her second-best time ever despite taking a fall early on in the race.

“It played out really well, other than the fact that I fell,” she said. “ Me falling was just of mindless. I was looking at the woman ahead of me and just didn’t hurdle in time and tripped on one of the barriers and yeah, won’t make that mistake again.”

Coburn’s first race at the USA Championship is Friday at about 4 p.m. mountain standard time. You can stream the race using the service NBC Sports Gold. The final is on Sunday at about 5 p.m. and will air on television on NBC Sports. (See details here)

By the way, Coburn will also be defending her world championship title in September and we’ll be following her, so stay to KBUT for more on Crested Butte’s own Emma Coburn.