Colorado Democrats See Romanoff As Their Progressive Champion At Caucuses 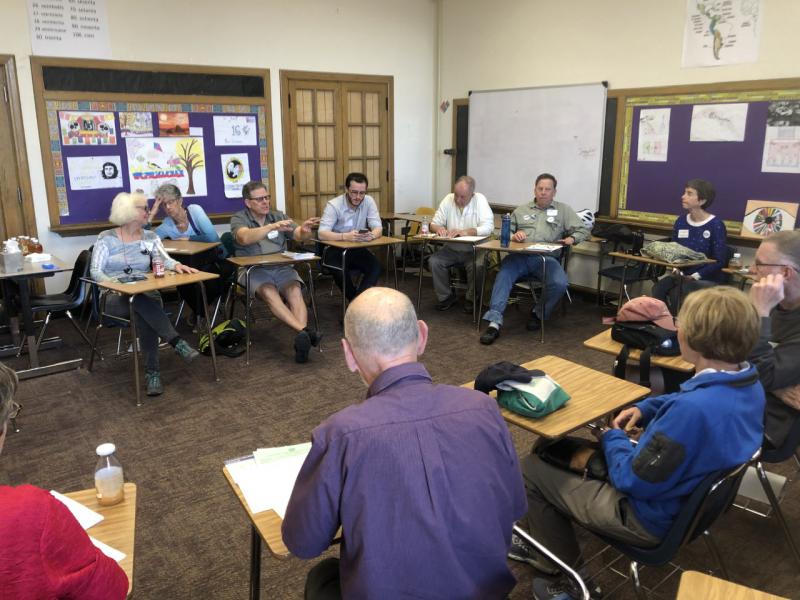 Photo: Democrats in Denver’s precinct 223 near Washington Park debate who their US Senate candidate should be on Saturday.

The thousands of Colorado Democrats who caucused Saturday chose former Colorado House Speaker Andrew Romanoff as their top choice to take on Republican Sen. Cory Gardner in the race for US Senate.

The preference poll results are a setback for former Gov. John Hickenlooper, who was leading in fundraising and most polls ahead of the caucuses.

The 20 Denver Democrats who caucused in a Spanish classroom for precinct 223 in the Washington Park neighborhood had a lively debate over the choice they faced between Romanoff and Hickenlooper.

The five Hickenlooper fans in the room argued that he is the most well-known, well-funded and electable candidate.

One touted him as a great negotiator who got Denver city employees to voluntarily take a pay cut during bad economic times.

Another said he was good at building teams and bringing people together.

And they feared Romanoff’s support of a Medicare for all plan would hurt his chances of defeating Republicans in November.

But to many of the 15 Romanoff fans, Hickenlooper is an “awkward” public speaker who isn’t progressive enough on issues ranging from oil and gas drilling to climate change.

“We can’t just settle for a generic Democrat,” one attendee said near the end of the debate, which lasted about an hour.

They were also critical of Hickenlooper’s support for Colorado’s oil and gas industry.

Another referred to Hickenlooper as “Frackenlooper” before being criticized by other Romanoff supporters for using the slur about the governor who once drank fracking fluid in an attempt to show the public how safe it was.

Romanoff supporters described the former state representative as a “visionary” who has more experience making laws than Hickenlooper did.

They also sought to brush off concerns Romanoff is too far left to defeat Gardner in the general election.

“He’s young enough for me,” Candy MacConaugha said. “I think it’s important we get rid of the gray beards in the Democratic party and he has a progressive agenda. A lot of his things, the Green New Deal, Medicare for all, those are aspirations, they’re not absolutes. That’s what he wants to work toward. That’s what I want to work toward.”

Romanoff carried precinct 223 against Hickenlooper by a vote of 15-5. None of the other three Democrats on the ballot received votes.

Romanoff also was leading in most of the major counties that had submitted results Saturday evening. However, results from caucuses in several counties were not available until Sunday.

Romanoff was leading statewide with 55% support, compared to 30% for Hickenlooper.

Hickenlooper barely won his home precinct in Denver. He told the Denver Post after the preference poll that he sees the primary ballot as being more important.

He also noted that other Democrats, including Gov. Jared Polis, did not win the caucus vote before they went on to win the party’s nomination.

The caucus is just one path toward earning a spot on the ballot.

Candidates who earn more than 30 percent of delegates at the state’s Democratic convention will qualify for the June 30 primary ballot. Candidates can also submit enough signatures to qualify for the ballot, a step Hickenlooper is also pursuing.

As she left the caucus location at South High School, Trudy Brown was optimistic about the party’s chances against Gardner.

“We’re going to beat Cory, beat him like a drum, because he does not represent mainstream Colorado values,” she said.

But others weren’t as confident. Back in the Spanish room where Denver precinct 223 was meeting, a caucus goer described Gardner’s public speaking skills as “smooth as silk.”

It’s one reason the man decided to support Romanoff, who he thought was a better public speaker than Hickenlooper.

“As we’ve learned this year, a president can only do so much without the support of both houses of Congress,” MacConaugha said. “It is absolutely imperative that we flip the Senate seat in Colorado to a Democratic senator, because that’s my failsafe if Trump were to be elected again.”