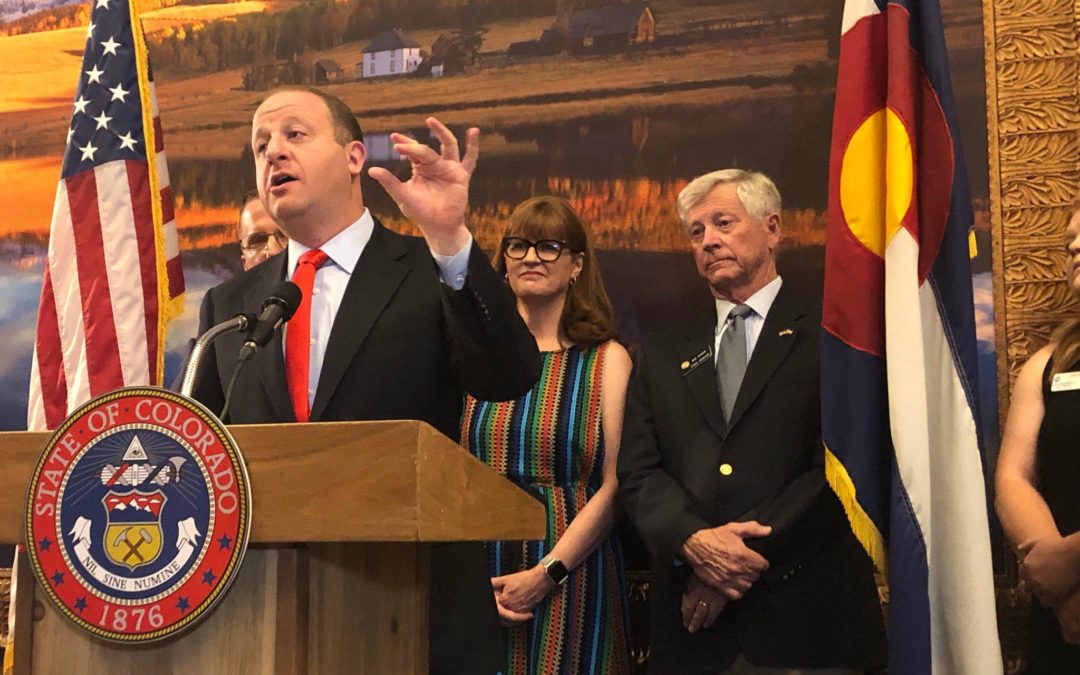 Photo: Gov. Polis announces that health insurance premiums on the state’s insurance marketplace are expected to drop in 2020 thanks to a new reinsurance program. Credit: Scott Franz/KUNC

Coloradans on both sides of the political aisle are celebrating the approval of a new reinsurance program that is expected to dramatically reduce health insurance premiums for some residents.

“By bringing down rates, we’ll make a dent in the number of uninsured, and today we’re really seeing the hard work we did this legislative session is coming to fruition,” Gov. Jared Polis said last month.

Reinsurance is often described as insurance for insurance companies.

The state is making a multi-million-dollar investment to help cover some of the most expensive insurance claims.

As a result, premiums on the individual marketplace are expected to drop an average of 18.2% next year.

Why are lawmakers so excited about the program? And will it succeed in the long run? KUNC’s Scott Franz walked a few blocks outside the Capitol to talk to Allie Morgan, a legislative analyst with the non-partisan Colorado Health Institute.

Who benefits the most?

Morgan says it’s a relatively small group of Coloradans who will see their premiums drop because of the reinsurance program.

“But it’s going to help people who have been hit really hard by increasing premiums and who have really, really struggled to afford the cost of insurance,” she said.

About 8% of Coloradans who have health insurance purchase it from the marketplace, which is where the reinsurance program is being applied. A majority of Coloradans get their insurance through an employer.

Morgan says many residents who do use the marketplace are already receiving substantial subsidies from the federal government. So they likely won’t see big drops in their premiums. But Coloradans who make more than $50,000 and don’t qualify for subsidies are likely to see significant premium reductions.

According to projections from the Polis administration, some Coloradans could save as much as $9,000 a month.

And geographically, the West Slope is expected to see the biggest cost reductions.

Morgan says the track record of reinsurance programs in other states is promising.

“In other states like Alaska, we’ve seen premiums continue to go down,” she said.

But there are some risks.

Lawmakers in Colorado only authorized the program for two years, so it will have to be reapproved down the road.

“Two years is not a whole lot of time to see how a big, new complicated health program works,” she said.

Morgan says there’s also the question of what happens at the federal level.

“The other thing looming is the federal government,” she said. “We have all these court challenges to the Affordable Care Act that have been bouncing back and forth between the Supreme Court and lower courts. And the current administration is not really trying to defend the Affordable Care Act, and that is always kind of hanging out there.”

Morgan says if the Affordable Care Act is struck down, “there would be a whole lot of things that would be thrown into chaos pretty quickly.”

Does reinsurance lower the actual cost of health care?

“It doesn’t address the underlying cost of health care,” she said. “Insurance companies will say the cost of care is really high, and that’s driving premiums. This does nothing to impact that. This helps consumers who are really struggling, to afford their insurance premiums by helping insurance companies who have a lot of risk to carry.”

Still, Morgan thinks it was a banner year for health care policy at the state Capitol.

“I think that reinsurance and also the public insurance option bill are a couple of the most substantial steps toward influencing insurance costs that Colorado has taken since Medicaid expansion in 2013,” she said. “Gov. Polis and Democratic leadership along with some of their Republican colleagues came in with pretty high expectations and pretty ambitious goals this year, and largely in the health care sphere those were accomplished.”