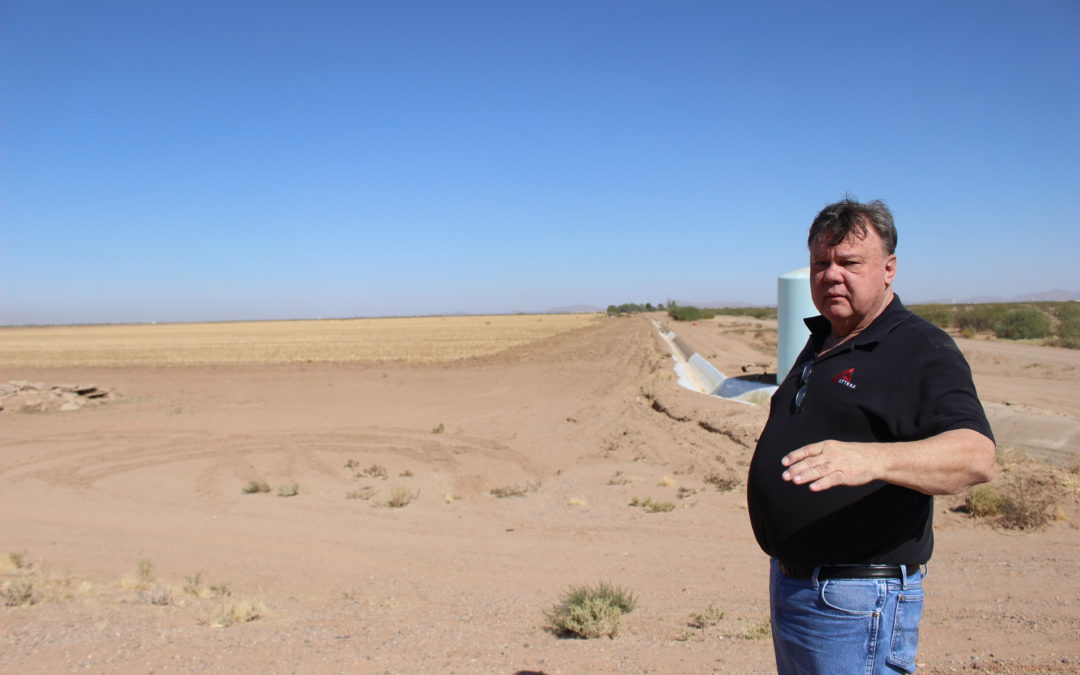 Photo: Patrick Johnson, president of Danrick Builders, at the corner of his 2,500-acre property in Pinal County. Johnson’s application for a water supply determination is on hold. (Bret Jaspers/KJZZ)

Patrick Johnson closed on 2,500 acres in Pinal County over five years ago. The property, just off Interstate 8, is mostly farm fields right now. Johnson’s plan is to build a dream spot for motorsports lovers, including two tracks for racing or testing, 2,000 homes, and a hotel.

But millions of dollars in, Johnson is a long way from a grand opening.

“You can’t get financing, you can’t do anything until you’ve got that water,” said Johnson, president of Danrick Builders.

Johnson is a developer stuck in limbo. The Arizona Department of Water Resources (ADWR) released a new model for Pinal County last month that projected supply and demand over the next 100 years. It showed the expected demand for groundwater pumping in the Pinal Active Management Area far outstrips the supply by over 8 million acre-feet of water.

Imagine the state of Maryland topped with a foot of water. The state says the shortfall is more than that.

Johnson has applied for an Analysis of Assured Water Supply, one of the ways a developer can reserve the water he or she needs and meet the state’s requirement that a subdivision show physical availability of water for 100 years of demand. His approval has been pending for years.

“As to what is truly down there, I’m suspecting that some of the missing boats from the Bermuda Triangle are under this property and they just don’t know,” he said. Johnson’s application is not reflected in the shortfall, which only takes into account water supply applications that were approved.

Frustration with the model

Johnson and other stakeholders have several beefs with the state water department. One is that its model is too conservative, as are the assumptions it fed into the model to predict what will happen in 100 years.

Christopher Salas, public works director for the town of Florence, said the estimates of groundwater pumping are too high. And if that makes the aquifer look bad, that might affect the next time the state reviews Florence’s Assured Water Supply designation.

“So the next designation period, between 2023 and 2025, they may bring our designation down,” he said. “That’s a very big concern for us.”

A lower “designation” — the kind of approval sought by municipalities — could mean limiting potential growth in a city or town.

Other sources of frustration are the rules around allocating the aquifer, and predicting how much each sector — agriculture, municipal, or tribal — is pumping. The state’s report said about 62% of the unmet demand comes from the ag sector, about 24% from planned-yet-unbuilt development outside of municipalities, and 10% from existing municipalities and industry.

“It isn’t that the water isn’t there or that we couldn’t pump it,” Johnson said. “It’s just that we can’t use it because of the way they’ve set this thing up.”

The groundwater model is an attempt to mathematically simulate the behavior of the aquifer. It accounts for different soil densities, how they interact, and how water moves through it. The state then fed assumptions into that model, including assumptions about how much water farmers may pump and how quickly water storage credits might be redeemed. That’s how it arrived at its estimate of over 8 million acre-feet in unmet demand over 100 years.

Regulatory agencies tend to be conservative, according to Matthew Tonkin, president of the hydrogeology consulting firm S. S. Papadopulos and Associates. His company reviewed the Pinal model in 2016, and Tonkin recalled ADWR wanting rigorous feedback on its work.

He said the significance of a model is not it’s exact precision, but how it’s used to make choices.

Another study of the Pinal County underground water basin is in motion, partly funded by the Bureau of Reclamation and partnering with ADWR and others. It has a different geographic outline than the state’s model, but will build upon it, and also examine different climate change scenarios.

“The basin study attempts to look at the effects of climate scenarios, demand scenarios, and then identifies what are the effects resulting from that,” said Kevin Black of the Bureau of Reclamation. The study is scheduled to be done in 2021.

In explaining its model and assumptions at a meeting last week, ADWR said it factored in decreases to agricultural pumping, for example, and use of stored water credits, and the aquifer still comes up short.

“It is a combination, I think, of an allocation issue and a water supply issue,” said department Director Tom Buschatzke said in a later interview. “It’s not solely one or the other.”

Buschatzke has repeatedly said his priority is consumer protection, meaning if a person buys a home, water must come out of the tap. To that end, this particular “run” of the Pinal groundwater model is meant to look at the Assured Water Supply program. Arizona’s AWS rules require subdivisions and municipalities in Central Arizona to physically show water for a hundred years of demand.

Kathy Ferris, a water policy fellow at Arizona State University, pointed out that groundwater, no matter how it’s allocated, is a finite resource.

“Nobody’s talking about the fact that, well, even if there was enough groundwater, if it’s all used up it gets all used up,” she said. “Then what?”

Becoming sustainable almost certainly means finding some new source of water for the area, and any solution would likely involve big infrastructure projects or large leases of water from Native American tribes. And many millions of dollars.

In addition to consumer protection, Buschatzke’s other priority is for people in Pinal County to take the lead.

“I think some of the things that might come out of the Pinal stakeholder group when that gets stood up can probably address coming up with solutions that will maybe move water from one sector to the other that’s not maybe anticipated to be moving in that direction right now,” he said.

The Pinal stakeholder group is just getting started. An ad hoc committee of the Legislature continues to meet. And the upcoming Legislative session will — again — talk about water.

Tonkin, whose company has offices across the country, said the West may be the first region to have concerns about declining groundwater, but it’s not the only one.

“You wouldn’t think Minnesota’s short of water, right? But they’re seeing the effects of development and consumptive use of water as well,” he said. “I do think it’s part of a big picture.”This story is part of Elemental: Covering Sustainability, a new multimedia collaboration between public radio and TV stations in the West, and part of a project covering the Colorado River, produced by KUNC and supported through a Walton Family Foundation grant. KUNC is solely responsible for its editorial content.