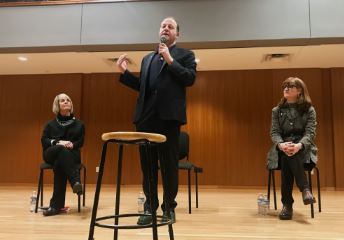 Jared Polis on Saturday made his first visit to the Gunnison Valley since assuming governorship earlier this year. He appeared alongside democratic Reps. Barbara McLachlan and Julie McCluskie at Western Colorado University. They answered questions from the audience and rallied for support of upcoming legislation.

Among the most talked about bills was one aimed at providing free full-day kindergarten to Coloradans, something Polis has called his primary goal for this legislative session.

The Governor’s own economic forecast, released on Friday, show’s enough money for the plan, but another, more cautious report from the legislature casts doubt. McLachlan, a democrat from Durango, is expected to introduce the bill with co-sponsor Jim Wilson, a republican of Salida in the coming weeks.