Greeley Sees Its Water Future In A Big Underground Bucket 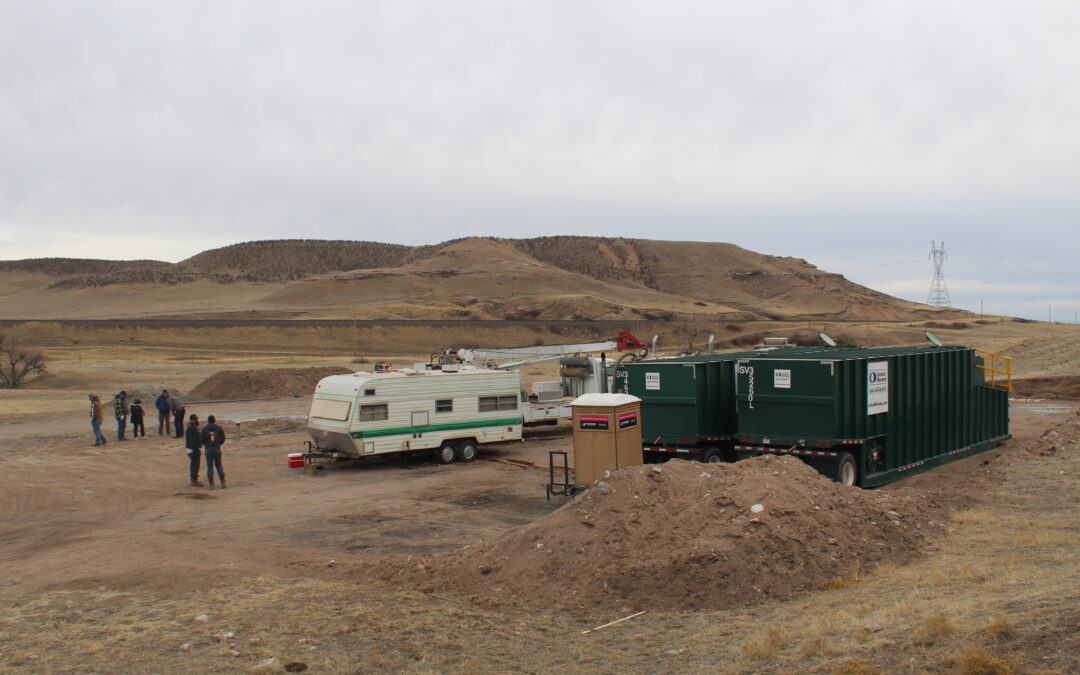 Photo Above: Greeley Water staff gather at the site of a test well drilled into the aquifer that sits below Terry Ranch on the Colorado-Wyoming border, east of I-25. (Luke Runyon/KUNC)

The city of Greeley wants to keep growing, and it needs water to do so.

Over the last couple years, city leaders have focused their energy on testing and developing an underground water supply to make that growth possible. The Terry Ranch project, estimated to cost upwards of $318 million to fully build out, would give the city access to an untapped water source — a rarity on the fast-growing, water-tight Front Range.

Unlike the city’s existing water storage, held in reservoirs along the Poudre River northwest of Fort Collins, the Terry Ranch project represents a pivot in how Greeley has developed new water supplies since its inception as the agricultural temperance settlement, the Union Colony, in 1870.

Instead of enlarging one of its existing reservoirs, city leaders are envisioning the massive groundwater basin on the Colorado-Wyoming border, sitting below grazing bison herds, as its way toward future growth, drought resilience and climate change adaptation.

“Looking around, you certainly don’t see any water,” said Adam Jokerst, standing among the ranch’s grassy rolling hills turned a wintry shade of buff. Jokerst is the Greeley Water Department’s lead for the proposed project.

Jokerst stood next to a test well drilled deep into an aquifer that’s held in place by layers of rock below the property. Think of it like an enormous contact lens under the surface, filled to the brim with water. State officials have deemed the aquifer “non-tributary,” meaning it doesn’t drain, or isn’t connected, to a flowing waterway.

The well is delivering treated drinking water from the city’s existing water treatment plant into the aquifer to see what happens to it after spending a few days below the surface. The treated water, the same thing you’d get if you turned on a faucet in Greeley, is trucked into the high elevation grassland by the thousands of gallons. It’s then pumped back out and tested.

As the pump whirred in the background, Jokerst ticked off the factors that he says make this project the smartest way to ensure Greeley can keep growing, without breaking the bank.

“This very well could be the future of Greeley’s water supply,” he said.

City officials have been pitching the Terry Ranch project to residents since making the project public knowledge in June 2020, while at the same time studying its efficacy. Here’s how it would work: Greeley would get the water in the aquifer, and $125 million to cover a portion of infrastructure costs, from a private company, Wingfoot Water Resources. The city would have years to build the pipelines, treatment facility and pump stations needed to draw water out of the aquifer, and put additional water in it.

Water needs aren’t so severe in the city that they’d need to bring it online rapidly, Jokerst said.

The first six miles of pipeline could begin construction in 2022, Jokerst said, while a full project build out could take 15 to 20 years. If dry conditions eat into their existing storage, that timeline could be sped up.

“Greeley is growing,” Jokerst said. “It’s expected to double (in population) before 2050, and as a water provider, we respond to that growth.”

The idea for this new storage project was born out of an old one. The Terry Ranch project came up as an alternative to the city’s proposal to enlarge its Seaman Reservoir on the North Fork of the Poudre River. Expanding dams and flooding riparian habitat — home to at least one threatened species — comes with its own financial and legal problems. And when the aquifer project presented itself as a cheaper alternative capable of storing more water with fewer environmental concerns, Jokerst said the city took it seriously.

will still be here,” Jokerst said.

Climate change is already raising temperatures across Colorado, and diminishing the snowpack the city relies on. This project is an investment in diversifying how Greeley stores water, as droughts are projected to grow in length and intensity over the next several decades, Jokerst said.

If the Terry Ranch project moves forward and is approved by the city council, Jokerst said Greeley will exit the 15-year federal permitting process to make Seaman Reservoir larger, having spent roughly $19 million on that dam project so far.

The logistical diagram of how water would move from the Poudre River to the aquifer and then from the aquifer to future homes and businesses is complicated. The financial arrangement to make this deal possible is moreso.

By handing over ownership of the water, Wingfoot, which owns the aquifer now, would receive credits, redeemable by developers interested in building within city limits and in need of new water taps.

As part of the deal, Greeley gets a big underground bucket of water and some cash to develop it, while Wingfoot makes their investment back when new water users — like subdivisions, commercial districts and factories — come knocking.

The aquifer under Terry Ranch is estimated to hold 1.2 million acre-feet of water. One acre-foot is the volume of water needed to fill one acre a foot deep, and is roughly equivalent to the annual water use of two Colorado households. For reference, Greeley uses on average 25,000 acre-feet in a year. Nearby Horsetooth Reservoir can hold more than 150,000 acre-feet.

In the deal, Wingfoot will receive 12,121 credits, each one equal to one acre-foot.

Right now, developers without ready access to water supplies can pay what’s called “cash in lieu” to Greeley to supply water to new construction. The city’s current cash in lieu rate for one acre-foot is $36,500. When selling the credits, Wingfoot will likely come under that cost to stay competitive with Greeley’s rate, Jokerst said.

While it’s not easy to pin down with certainty the exact value of the water at stake, it’s possible to game out some scenarios. In a highly unlikely hypothetical scenario where Wingfoot sells all 12,121 credits immediately after closing for the slightly discounted price of $36,499, the water credits would be worth $442.4 million.

In a future where water supplies are tighter, demand is growing, and developers are clamoring to find places to build, that per credit price is likely to rise, as it has in another constrained water market on the northern Front Range, the Colorado Big-Thompson Project.

But the big unknown is how fast Greeley will grow, and how much water it will need.

“These credits will only be viable as long as the city (of Greeley) continues to prosper,” said Wingfoot founder and CEO Christopher Dietzler. Greeley is already projected to grow, and Dietzler said the deal ties his company’s money-making potential to Greeley’s growth. That relationship could make Wingfoot one of the city’s boosters.

“There may be opportunities where a large business that requires a lot of water wants to locate in Greeley and we may be able to really facilitate that happening,” Dietzler said.

But some aspects of the Terry Ranch project have made a group of residents, like John Gauthiere, anxious. He worked as an engineer for the city for more than 20 years, and has joined with fellow residents in voicing concerns in the group Save Greeley’s Water.

That’s worrying because water pumped from the aquifer contains uranium, Gauthiere said. Tests have shown some wells at the ranch with uranium levels hovering right at what state regulators deem a maximum contaminant level, or the highest amount of uranium allowed in drinking water.

City staff say the uranium can be treated to undetectable levels. Gauthiere wants commitments from the city that it will remove all uranium in perpetuity, no matter who’s in charge of the water department, even if the cost of uranium treatment and disposal rises.

“No one should be drinking uranium if they can help it, if they have a choice,” Gauthiere said. “We have a choice. We’ve got a good mountain supply that can be expanded.”

While Greeley officials say Terry Ranch is more of a sure bet than the enlargement of Seaman Reservoir, Gauthiere and others remain unconvinced. He sees the move as an abandonment of a long-term water storage project with a significant financial investment already behind it.

Gauthiere is also worried about how eager Greeley is to wrap up the deal. He notes that the project has only been public knowledge since last summer, and what’s being proposed would play a significant role in how the city develops over the next several generations.

While the COVID-19 pandemic has made holding public, in-person events about the project more challenging, Greeley Water’s Adam Jokerst said the city has been open and transparent in answering questions from residents, and encouraged those with questions to reach out to city staff and city council members. The project has run a gauntlet of feasibility studies since last summer and so far they haven’t come across a dealbreaker, Jokerst said.

“The data proves conclusively that Greeley can operate the project as expected, that we will be able to treat all detectable uranium, and that injection of water into the aquifer will not mobilize contaminants,” Jokerst said in an email.

The Greeley city council is expected to take a final vote on the deal during its March 2 meeting.

“We have an obligation to our ratepayers that when they have a tap from Greeley that will always have water,” Jokerst said. “As growth comes, we have to be able to respond to it.”

This story is part of ongoing coverage of water in the West, produced by KUNC and supported by the Walton Family Foundation.

Greeley Water’s Adam Jokerst has been leading the city’s effort to test the efficacy of the Terry Ranch project in an effort to boost the city’s water storage potential. (Luke Runyon/KUNC)