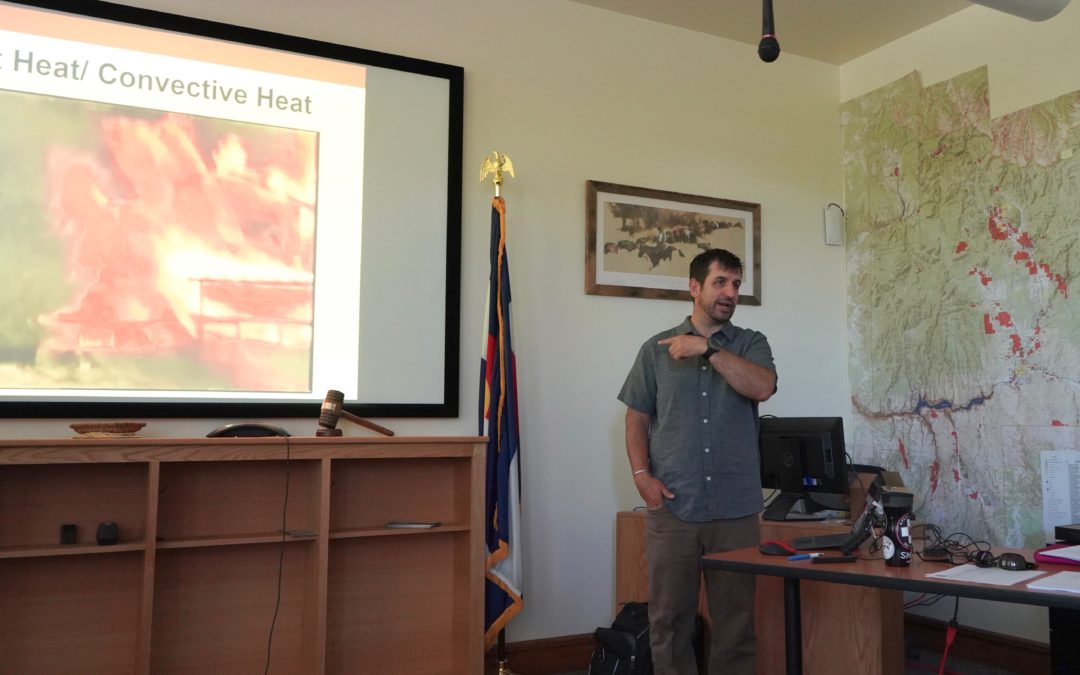 PHOTO: Kelly Johnston of Community Planning Assistance for Wildfires (CPAW) points to a photo of a burning house as he tells Gunnison County officials about wildfire behavior. Credit: Sam Liebl

Colorado’s wet winter and rainy spring have kept fire dangers low so far this summer. But that hasn’t stopped city and county planners from looking at how codes could be changed to reduce wildfire impacts. Gunnison County officials recently hosted experts from across North America to apply the latest wildfire research to the valley.

Reno, Nevada is nearly 1,000 miles away from Gunnison County. But the fire situations of the two communities aren’t that far apart. Both have an arid climate, sagebrush that dries out in the summers, and houses that were not built with wildfire risks in mind.

So it was noticeably tense when Kelly Johnston, a forester and wildfire expert, showed a shaky home video of a grass fire in Reno climbing up a hill, igniting a house and then spreading to three other homes.

“I think the response time before they actually got water on this fire was 6-7 minutes from the time 9-1-1 was called. That’s phenomenal, I mean you can’t get any better than that. And yet we are still seeing one structure already fully involved. This is within seconds of the fire starting,” Johnston said.

In the room with Johnston were about 30 city and county planners, real estate agents, firefighters, conservation advocates and residents from Gunnison County. They had gathered Wednesday morning at the Blackstock Government Building in Gunnison to hear Johnston and his colleagues speak about how wildfires behave and what can be done to reduce the risks wildfires pose to people and to property.

“There are a lot of communities out there that have a big fire problem but they haven’t necessarily recognized that they want help with that, so if they ask for that, and we can see that we can be successful in helping them, then that would be a good candidate,” Johnston said.

The organization behind the event, CPAW, decided that Gunnison County was a good candidate because of the collaboration already happening between firefighters, county planners and other agencies. CPAW stands for Community Planning Assistance for Wildfires, and it’s a partnership between policy groups, private foundations and the U.S. Forest Service. This year Gunnison County is one of a handful of communities getting help from CPAW. The others are in California and Arizona.

“We’re certainly seeing in areas around Colorado, Durango last year, increasing impacts from severe wildfire hazards. And so we know we have those conditions exist in Gunnison County, we know we have the wildland-urban interface and increasing development pressure and recreation throughout the county, and so we wanted to consider opportunities and recommendations to mitigate that risk for our community,” Pagano

But Johnston and other presenters spent much of the morning speaking about how fires move out of forests and into residential or commercial areas on the fringes of cities, what fire experts call the Wildland Urban Interface.  When that happens, firefighters have a much more complex, dangerous and potentially overwhelming situation on their hands, said Jeff Duke the assistant fire chief for the Town of Crested Butte.

“This is information that you would think people would know and have, but sometimes they don’t really understand how easy it is for the wildfires to spread into the urban areas. They may think that if they are a mile or two from any trees that they are safe, but with the embers carrying through the air and landing on their wood deck, their house isn’t actually safe,” Duke said.

And when houses do catch fire, they burn longer and hotter than even the most overgrown forests.

“The difference when you get into a built fuel, like a structure, is that our houses are basically all of those trees, cut into dimensional lumber, reorganized, rebuilt and filled with gasoline. All of your carpet, your couches, all of the things that you buy. If they are made out of plastic or vinyl or foam they are hydrocarbons, and they burn very hot, they burn for a long time. And so now we are looking at a structure that is burning at a very high intensity for 45 minutes. And it could be even longer,” Johnston said.

Burning houses pump out embers that land on the roof gutters, wood shingles and garden mulch of neighboring home, sometimes more than ten miles away. Johnston showed photos from Washington State, South Carolina and Alberta where this cycle of embers and ignitions burned entire city blocks to the ground.

Gunnison County Officials want to prevent that from ever happening here. Later this year the CPAW team will provide them with a new map of wildfire risks and policy recommendations to keep communities safer during future wildfires. The assumption that undergirded the entire workshop was that fire is not a matter of if, but when. And it pays for everyone to be prepared.