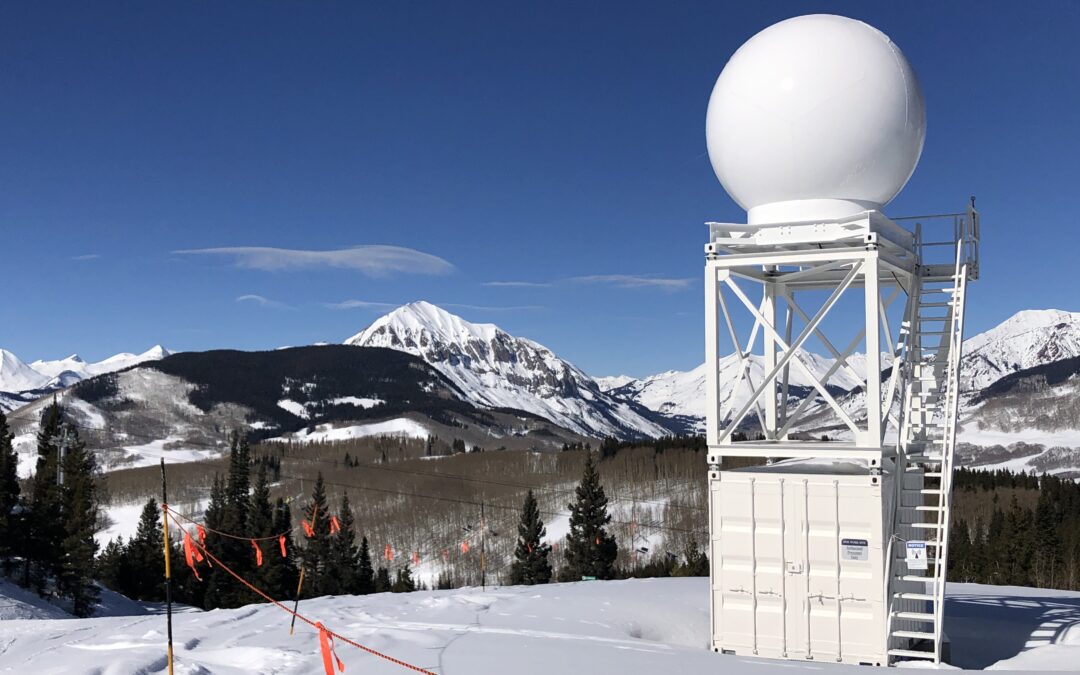 For nearly a century, scientists from around the world have studied water and climate in the north end of the Gunnison Valley. In 2021, the high mountain watershed entered a new chapter: a first-of-its-kind project where scientists will trace snow from where it arrives in the atmosphere, to where it melts into the ground.

The research aims to understand water and snow in mountain systems for the first time.

Dozens of instruments were placed in the north end of the valley starting last fall. A state-of-the-art radar is located at the intersection of popular ski trails on Crested Butte Mountain Resort. And rows of tan shipping containers and shiny instruments line the meadows along the East River from Mt. Crested Butte to Gothic.

Rosemary Carroll lives in Mt. Crested Butte and works as an associate research professor in hydrology at the Nevada-based Desert Research Institute. Her work studies the snow and streams that span from Paradise Divide – all the way down to Almont.

“I try to do the whole water budget of the basin,” said Carroll. “Which ties snow all the way down through deep geology.”

Carroll’s work is part of a national science research campaign, the Surface and Atmospheric Integrated Field Laboratory, OR SAIL. Over 150 scientists will spend two years measuring snow and water by using dozens of scientific instruments. The goal is to better understand mountain watersheds, and mountain climates, around the world.

“Why this area why mountain systems,” said Carroll. “It’s because these are the systems that some would call a canary in the coal mine for climate change. One-sixth of the global population receives its water from snow-fed rivers of mountain systems. So it’s not trivial. And the systems are also experiencing a lot of change.”

Ken Williams, The SAIL program’s senior scientist, is a geologist who has studied groundwater with Carroll since 2014. The pair worked together on the Watershed Function Science Focus Area.

After years of working in the area’s streams and rivers, Williams said he noticed a glaring hole in his research: understanding how snow falls from the sky.

“And so if you really are interested in designing a scientific experiment, that’s looking at the future of water in the West, you have to understand all the processes that impact the flow of that water from the time it arrives in the atmosphere, to the time it eventually makes its way into bedrock, and then into streamflow,” said Williams.

On a sunny day in January, Williams shuffled through the lift line at Crested Butte Mountain Resort with Dan Feldman to check on the project’s scientific instruments. Feldman is the principal investigator of the SAIL program. His work focuses on atmosphere and weather patterns to determine how and when rain and snow fall in the mountains. To do this, he uses radars that track precipitation.

The pair rode to the top of Red Lady Express to check on an xband radar. The radar is 25-feet-tall and resembles an oversized golf ball because of its white plastic covering. It’s reached by a narrow ladder that can be difficult to navigate in ski boots.

Feldman explained the importance of the xband radar in the larger SAIL program research.

“The x band radar measures precipitation, it also measures what type of precipitation is occurring,” said Feldman. “So not just how much, whether it’s rain or snow, and where it’s occurring all, you know from here to a radius of about 40 kilometers.”

The instruments being used in the SAIL program are on loan from the Department of Energy’s Atmospheric and Radiation Measurement (ARM) user facility. The mobile research facility moves around the world to conduct atmospheric and climate research.

Williams says the radar on the mountain, coupled with the one in Gothic, will provide a highly detailed understanding of weather patterns in the mountains. While the group is interested in learning about the East River Valley, the information they collect will tell a bigger story about mountain watersheds.

“We are utilizing this watershed as being one that’s representative of many watersheds within the western United States,” said Williams. “We want our research and our research findings to be broadly representative, or broadly relevant to the future of water in a variety of mountainous systems.”

The SAIL program will continue until next June with support from the Rocky Mountain Biological Laboratory –  and –  the data will be available to everyone. As water levels reach historic lows in the Colorado River Basin, understanding how water travels from mountain headwaters to dams below – couldn’t come at a better time. What water managers choose to do with the data is yet to be seen.

KBUT’s Headwaters series was made possible by The Water Desk, an initiative of the Center for Environmental Journalism at the University of Colorado Boulder.

Listen to the whole series!