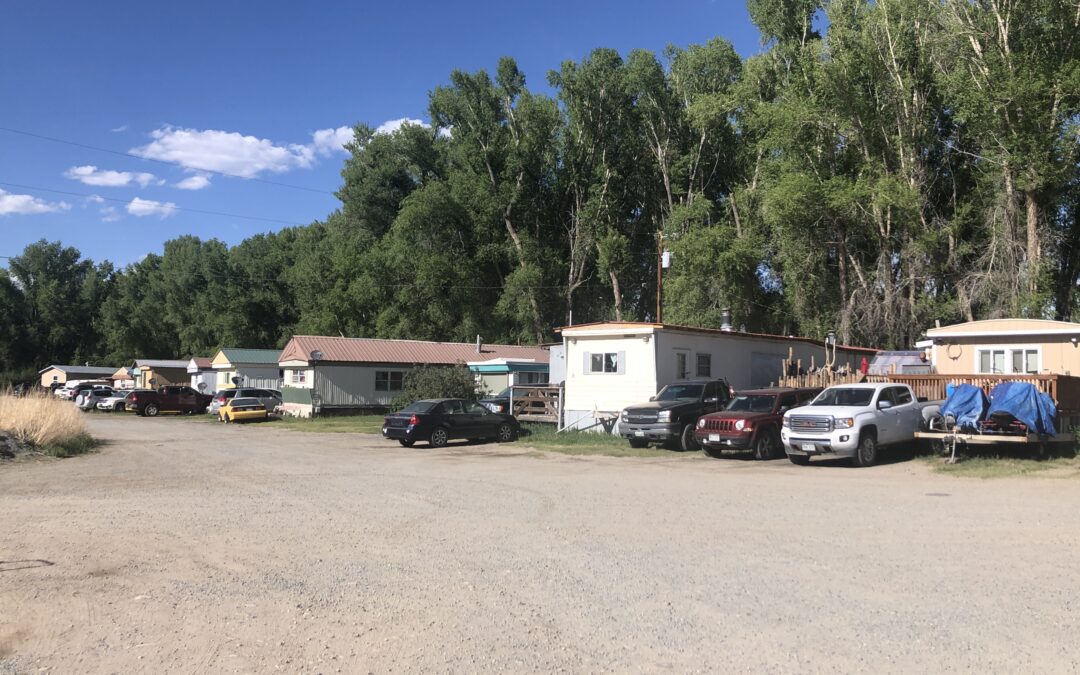 Water supply is regularly interrupted for residents in a Gunnison mobile home park. After years of bringing attention to the issue, they still haven’t seen solutions. Several members of the community have been working on a state-wide plan to bring more attention to water equity issues.

A few weeks ago, residents of a mobile home park in Gunnison were without water for most of the day; the three wells that supply water are often unreliable. Those who live in the park have been speaking up for years without result. While some in the valley struggle with reliable water, a few Gunnison residents worked on a new state initiative to address equity in water issues in Colorado.

Just off the highway, a few minutes north of Gunnison, is Country Meadows mobile home park. The dusty dirt lot is made up of about 55 mobile homes nestled beneath a stand of cottonwood trees.

Elizabeth McGee moved to the park last August, and it didn’t take her long to learn that the water may or may not come out of the faucet – depending on the day.

“My sister lives with my mom, she’s like, ‘yeah, we’ll go without water forever’ and I’m like, this is not okay,” said McGee.

This motivated McGee to join the nonprofit, Organizacion de Nuevas Esperanzas, or ONE, which translates to “new hopes” in Spanish. Last year, a group of mobile home park residents formed the nonprofit in to voice their concerns about water and a long list of other problems.

“I think 20 trailers up here in front that went without water almost all day yesterday,” said McGee. “It was on for a little while, and then it got turned off again.”

McGee was recently elected as ONE’s board president, and she says the nonprofit has helped residents connect with the county, lawyers and advocacy groups to call attention to the park’s owner who rarely responded to their concerns. In 2020, they filed complaints with the Department of Local Affairs (DOLA), but since the park sold in the spring, no one is sure if, or when, they’ll see a resolution.

Gunnison sits at the headwaters of the Colorado River. Access to water to drink, shower, wash dishes and do laundry is usually as simple as twisting a knob and letting water run from the tap. But a  2019 census study found that one in 45 homes in Gunnison County has poor plumbing.

“I know within my own local community, there are people who don’t have access to good quality, clean water,” said Chavez.

Chavez is part of a Colorado group that spent the last year discussing many issues around water equity. The conversations focused on water equity often focused on the fact that some don’t have access to reliable, clean drinking water.

The group is called the Water Equity Task Force, and it brought together 21 diverse people, including members of Colorado’s federally recognized tribes and the acequia community, located in Southeast Colorado.

“Our conversations and our task, as dictated by the governor, was really to identify the ways in which the Colorado Water Conservation Board could ensure that they are having diversity, equity and inclusion around conversations on water, and that we reach all the various populations,” Chavez said.

The group met four times over a year to help incorporate equity into the Colorado Water Plan. The state created the plan in 2015 to work on the state’s water challenges while planning for an uncertain future. This year, the plan will see a huge update, and addressing equity is a big priority.

Some of the members of the task force had deep connections to water, but others were community members with other areas of expertise. Like Dr. Alina Luna, professor emeritus at Western Colorado University.

For Dr. Luna, water equity means everyone has access to potable water.

“We need water to allow people not only to thrive,” said Dr. Luna. “But also to be able to exist and survive.”

Dr. Luna has years of experience in equity-focused work. She chaired Western’s Diversity, Equity, Inclusion and Internationalization Committee and created an undergraduate minor with a focus on diversity.

Although she admits she didn’t know much about water issues before sitting on the task force, she thinks if people can understand the basis of equity, they can apply it to all water issues.

”You know, people, I think, confuse equity with equality,” said Dr. Luna. “Equity is about meeting people where they are giving them what they need to be successful. Equality assumes that everybody needs the same thing to succeed.”

Back at Country Meadows, Elizabeth McGee said she never considered herself an organizer or community activist before moving here.

“I used to be a very quiet in my own little world type person,” said McGee. “And then I moved out here and I was getting tired of all of us getting abused because that’s pretty much what’s happening, is we’re being abused.”

No one in Country Meadows is sure what will happen now that the park is under new ownership, but McGee said she and members of ONE will continue to fight until they know every home in the park has a steady stream of water.
KBUT’s Headwaters series was made possible by The Water Desk, an independent initiative of the Center for Environmental Journalism at the University of Colorado Boulder.