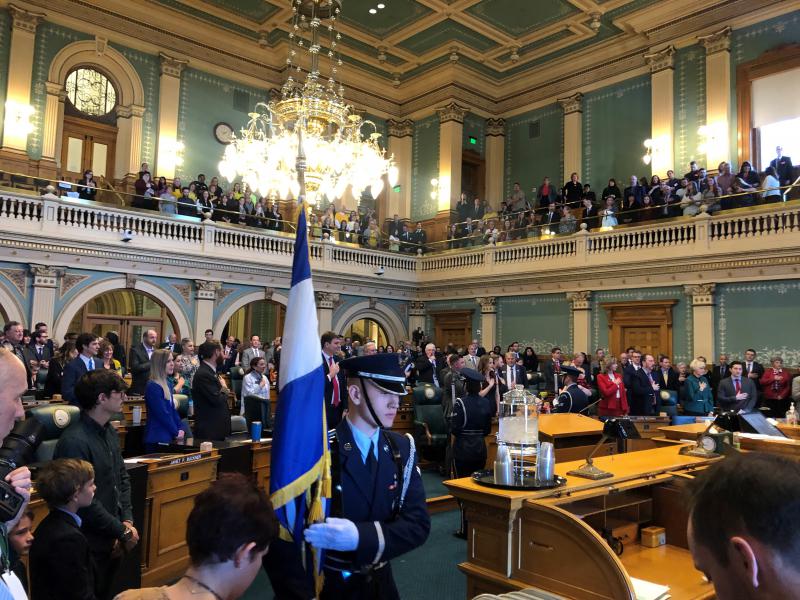 There were the usual jokes and friendly banter between the House and Senate.

State lawmakers from both sides of the aisle exchanged hugs in a chamber that felt a bit like a school getting back to work after an eight-month break.

But amidst the pomp and circumstance of the opening day of Colorado’s 2020 legislative session, lawmakers also drew some clear battle lines.

“If a new payroll tax is imposed under the guise of a fee to establish a new paid family leave bureaucracy, we’ll fight it,” said House Minority Leader Patrick Neville, R-Castle Rock, minutes after Democrats vowed to pass a paid family leave plan this year.

Some Republicans are also vowing to fight a proposal to create a new public health insurance option that supporters say will lower premiums on the individual market.

This is the last year Democrats are guaranteed to hold majorities in both the House and Senate before the November elections.

So after ticking off a list of accomplishments from last session, Democratic House Speaker KC Becker outlined an ambitious agenda in her opening day speech. As she talked about her priorities, she made it clear Democrats do not intend to shy away from big debates during an election year.

“We need everyone at the table to promote responsible gun ownership and move forward on gun safety initiatives that have already been adopted on a bipartisan basis in states across the country,” she said, drawing applause from her fellow Democrats but silence from the Republican side of the room.

In the Senate, Democrats have already unveiled five bills.

One measure would forgive student loan debt for Colorado college graduates who remain in the state and make repayments based on their income.

Another would fund a behavioral health training program to help teachers spot mental health issues in their classrooms.

Lawmakers have 120 days to deliberate and pass legislation.

Last year, the legislature passed 598 bills and approved more than 4,000 amendments to them.

Gov. Jared Polis is scheduled to deliver his State of the State address at 11 a.m. Thursday.