Zoom Calls And Banjos: How Hickenlooper And Romanoff Are Adapting To Life On Virtual Campaign Trail 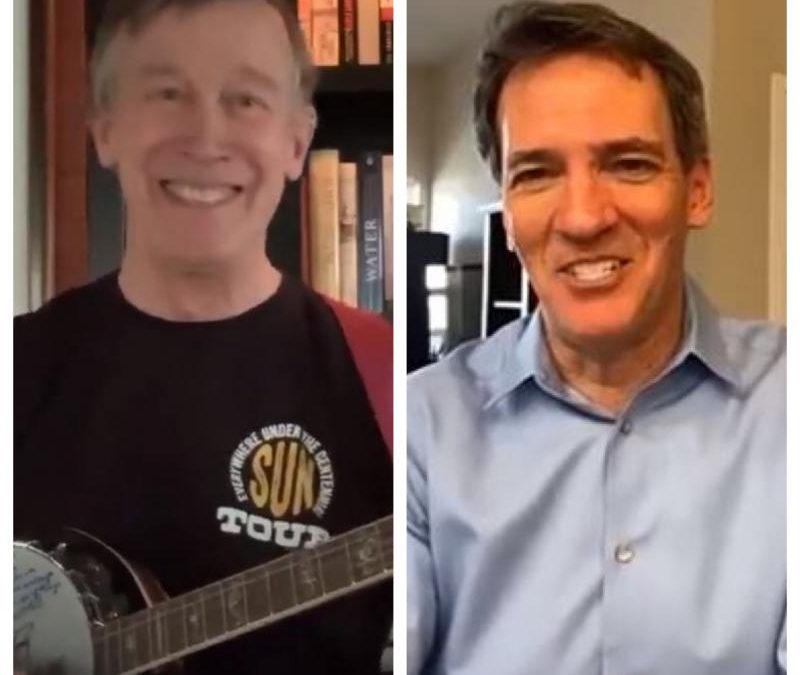 It wasn’t too long ago that former Gov. John Hickenlooper was shaking hands and kissing babies in Iowa during his short-lived presidential campaign. Now he spends hours talking into an iPad taped to a stack of wedding photo albums in his family room.

“I mean, it’s a makeshift studio is what it is, but it works,” Hickenlooper said last week shortly after filming a music video with a banjo to promote universal vote-by-mail during the pandemic.

In addition to trying to make waves with homemade music videos, Hickenlooper said the coronavirus is changing his campaign for the U.S. Senate in other ways.

“For so many people, this is the worst hard time of their lives,” he said. “They’re losing their jobs. They’re not sure if they can make rent, whether they’ll get forbearance, whether they’ll be able to put food on the table. … Our volunteers are calling and texting to people all over the state of Colorado and not trying to get them to vote for John Hickenlooper, but trying to see if they are okay.”

But for a governor who loved opening for bands in front of thousands of people at Red Rocks, the transition to a more isolated campaign hasn’t been easy.

“When I meet people, I get energy out of the exchange,” he said. “So if I go to a fundraising event, and 30 or 40 people are there, I come out saying, ‘All right, what’s next? Where can I go next?’… I don’t get that same energy when I’m on the phone or using a Zoom. So I am just trying to work harder like anybody. That way you get through these really challenging times in life is always to work harder.”

And he’s not the only one having to adapt.

Former Colorado House Speaker Andrew Romanoff is regularly holding virtual town halls and rallies complete with musical performances as he tries to compete with Hickenlooper for the Democratic nomination.

“We’ve been doing town halls every Tuesday at 5 p.m., every Friday at noon, and I think we’ve talked to 10,000 people or more in the last few weeks,” Romanoff said.

But Romanoff has been behind Hickenlooper in fundraising and polling. He hopes to catch up by holding more online events, which he admits aren’t as gratifying as the face to face interactions he is more used to having with voters.

“You can’t look people in the eye and shake their hand, but at the same time, the challenges you face as a candidate in this environment are nothing at all compared to the real struggles that people are going through, just to put food on their tables and make sure they got a place to live,” he said.

So, his campaign is taking on a humanitarian role. During a recent town hall, he shared a text from a woman in Aurora who sounded suicidal.

“She said, ‘I’m getting to think that people like me don’t matter,’” Romanoff said. “She said, ‘You say we’re in this together, but I feel like I’m all alone. Nobody cares about me. Maybe I should give up too. Maybe I should give up too.’ I called the crisis line immediately and they got in touch with her and trying to make sure she could get the counseling and support she needs to stay alive.”

While both Romanoff and Hickenlooper are mastering Zoom and spending more time on the phones, their digital campaigns are very different. Romanoff is holding large virtual rallies that feature a string of endorsements and musical guests playing from their homes.

And when it comes to online fundraising, the advantage may favor Hickenlooper and incumbent Sen. Cory Gardner.

Kyle Saunders, a professor of political science at Colorado State University, is watching the race closely.

“I think this environment makes it a little bit harder for Romanoff than it otherwise would have been. It was already hard on him to begin with,” Saunders said. “That’s not to say he won’t succeed. I think the probability is low, but I think it’s possible. But you need a lot of public appearances, a lot of grassroots activism to really make a dent in Hickenlooper’s campaign finance and, perhaps, electoral lead.”

To that end, Romanoff is urging Hickenlooper to join him in seven debates before the June 30 primary. He says Hickenlooper didn’t appear at enough of them before coronavirus shut things down.

“John skipped 19 debates, and to me, it’s unacceptable,” Romanoff said. “If you want a senator who doesn’t show up or answer questions, I’d say you’ve already got one. And his name is Cory Gardner.”

Hickenlooper said he looks forward to debating his fellow Democrats in the primary race. But he also sees some risks in taking the virtual stage during the primary.

“I have been very diligent to make sure that I don’t attack any of the other Democratic candidates because it’s going to be a hard election for everyone,” Hickenlooper said.