As State Lawmakers Return To Work, Gov. Polis Weighs In On Looming Debates 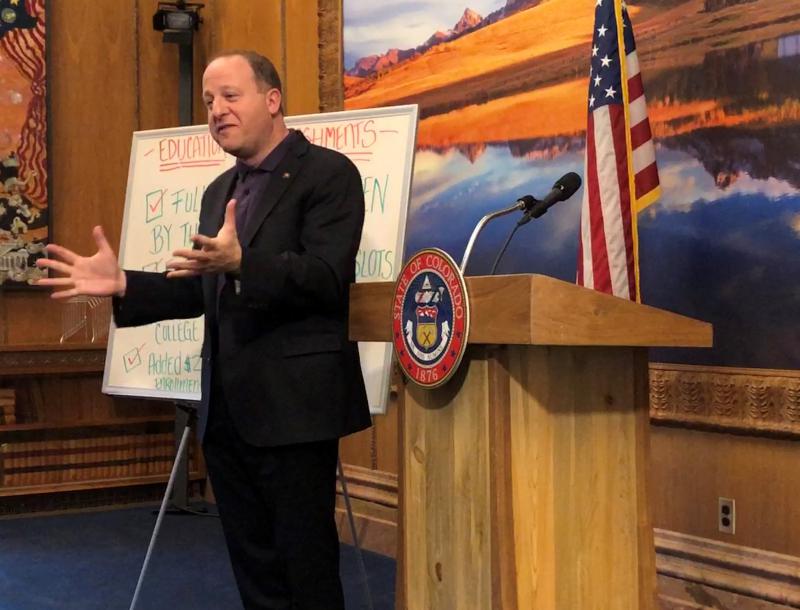 Gov. Jared Polis recently outlined an ambitious agenda for lawmakers in 2020. He vowed to reduce health care costs, find a solution to the state’s road funding woes and get more children into preschool. But some of the governor’s priorities will prove to be contentious.

Capitol Coverage reporter Scott Franz sat down with the governor after his State of the State address to talk about some of the hot-button issues that are on the table this legislative session.

The second piece is then how do we run it? And from our perspective we want to make sure the state isn’t on the hook from a fiduciary perspective, that taxpayers aren’t under any risk for it. Like other benefits, many companies do it themselves and others should be able to insure for it.

We’re starting to see some negative advertising come out attacking the public health insurance option proposal. Do you think this is going to have an impact on the course of this legislation?

I’m encouraged. (The negative ads) mean we are getting close to the solution if the special interests are worried and they are already throwing money against it. It’s outrageous that for-profit hospitals are using the money they make from overcharging patients to spend money against reforms that save people money. Legislators on both sides of the aisle are smart and can see that for what it is.

I think everybody who was elected to this body, we hear from people that health care costs too much. I don’t think there’s any Coloradans who think they are getting a good deal because they are not. Whether it’s the high cost of prescription drugs, high cost of insurance, we really need to have a bold agenda for saving people money on health care.

Members of your party are vowing to renew their push to repeal the death penalty this year. Is this something you will get behind?

I support that. Whether you abolish it now or in 10 years or 20 years, it’s an archaic institution. It’s very costly to taxpayers. That will happen In Colorado. There hasn’t been an execution in so long in Colorado. It’s really in many ways a formality. But whether that happens in a year or five years or 10 years, I think that’s the way it’s going — not just in Colorado, but nationally.